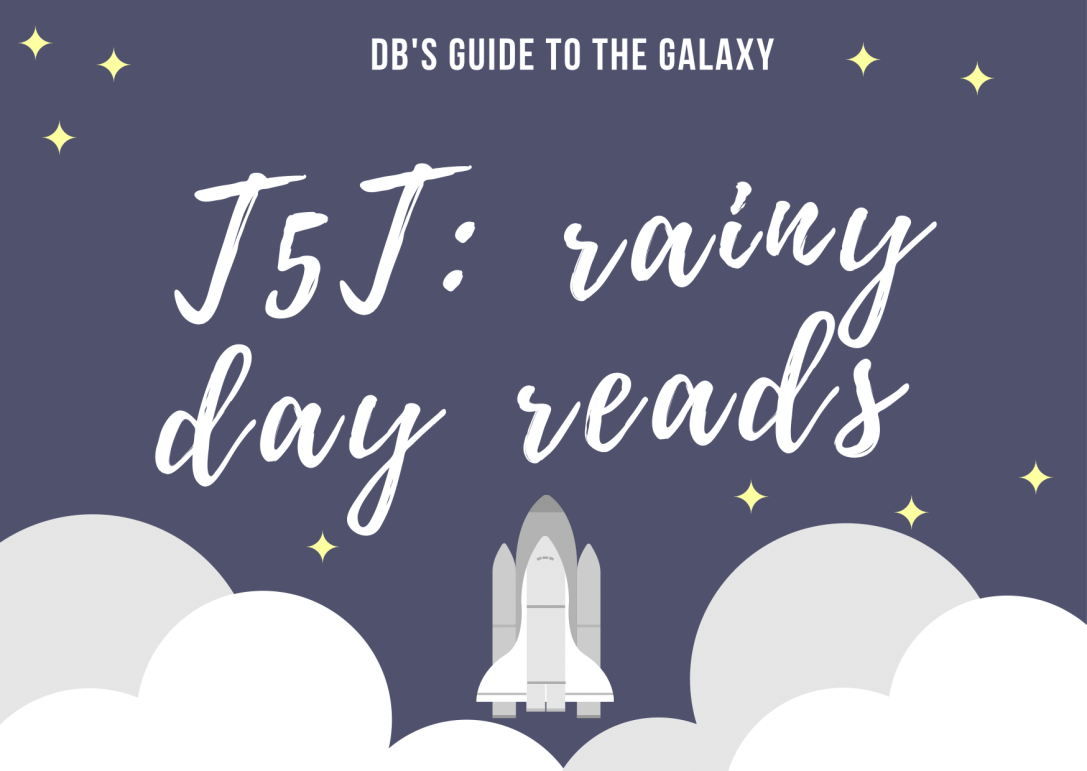 Hopefully I’ll recommend some I’ve read and not just go “this looks good!” Not that there’s anything wrong with listing booke you haven’t read, I think it’s just better if you’ve read it and then can recommend 😄

I’ve recently found out I can’t really read AND watch things anymore? I’m extremely unhappy about that piece of information. HOWEVER, I have now discovered ambience videos on YouTube? So now when I read I choose different videos to help me get into the mood of the book. It’s definitely helped, though I’m still sad about how I got to the discovery 😢

Of course Meeghan @ Meeghan Reads is where you can see which prompts have gone by and which are still coming! Here’s where you can look at the books she’s recced!

The Starless Sea by Erin Morgenstern (GR/SG) – I’m actually reading this right now and it’s so so good? Definitely a book I’d want to (and could possibly, honestly) devour in a rainy day. Editing!DB here to tell you that I finished it and I absolutely loved it ➡ From the New York Times bestselling author of The Night Circus, a timeless love story set in a secret underground world–a place of pirates, painters, lovers, liars, and ships that sail upon a starless sea.

Zachary Ezra Rawlins is a graduate student in Vermont when he discovers a mysterious book hidden in the stacks. As he turns the pages, entranced by tales of lovelorn prisoners, key collectors, and nameless acolytes, he reads something strange: a story from his own childhood. Bewildered by this inexplicable book and desperate to make sense of how his own life came to be recorded, Zachary uncovers a series of clues – a bee, a key, and a sword – that lead him to a masquerade party in New York, to a secret club, and through a doorway to an ancient library, hidden far below the surface of the earth.

What Zachary finds in this curious place is more than just a buried home for books and their guardians – it is a place of lost cities and seas, lovers who pass notes under doors and across time, and of stories whispered by the dead. Zachary learns of those who have sacrificed much to protect this realm, relinquishing their sight and their tongues to preserve this archive, and also those who are intent on its destruction.

Together with Mirabel, a fierce, pink-haired protector of the place, and Dorian, a handsome, barefoot man with shifting alliances, Zachary travels the twisting tunnels, darkened stairwells, crowded ballrooms, and sweetly-soaked shores of this magical world, discovering his purpose – in both the mysterious book and in his own life.

Well Met by Jen de Luca (GR/SG) – Yes, I did just include this book in the previous Top 5 Tuesday post but also I’ve just finished the second book and I definitely think it’s a good rainy day read. Binge all 3 books and everything 😄 ➡ All’s faire in love and war for two sworn enemies who indulge in a harmless flirtation in a laugh-out-loud rom-com from debut author, Jen DeLuca.

Emily knew there would be strings attached when she relocated to the small town of Willow Creek, Maryland, for the summer to help her sister recover from an accident, but who could anticipate getting roped into volunteering for the local Renaissance Faire alongside her teenaged niece? Or that the irritating and inscrutable schoolteacher in charge of the volunteers would be so annoying that she finds it impossible to stop thinking about him?

The faire is Simon’s family legacy and from the start he makes clear he doesn’t have time for Emily’s lighthearted approach to life, her oddball Shakespeare conspiracy theories, or her endless suggestions for new acts to shake things up. Yet on the faire grounds he becomes a different person, flirting freely with Emily when she’s in her revealing wench’s costume. But is this attraction real, or just part of the characters they’re portraying?

This summer was only ever supposed to be a pit stop on the way to somewhere else for Emily, but soon she can’t seem to shake the fantasy of establishing something more with Simon, or a permanent home of her own in Willow Creek.

Curse of the Specter Queen by Jenny Elder Moke (GR/SG) – And now that the sequel’s out you can jump straight into it as well! These two books were really fun to read and you can read here and here 2 to see my reviews on the two books. I very much hope there’ll be more! ➡ MAY THE HAZEL BRING YOU WISDOM AND THE ASPEN GUIDE AND PROTECT YOU…

Samantha Knox put away her childish fantasies of archaeological adventure the day her father didn’t return home from the Great War, retreating to the safety of the antique bookshop where she works. But when a mysterious package arrives with a damaged diary inside, Sam’s peaceful life is obliterated. Ruthless men intent on reclaiming the diary are after Sam, setting her and her best friend, along with her childhood crush, on a high-stakes adventure that lands them in the green hills outside Dublin, Ireland. Here they discover an ancient order with a dark purpose – to perform an occult ritual that will raise the Specter Queen, the Celtic goddess of vengeance and death, to bring about a war unlike any the world has ever seen. To stop them, Sam must solve a deviously complex cipher – one that will lead her on a treasure hunt to discover the ancient relic at the heart of the ritual: a bowl carved from the tree of life. Will she find the bowl and stop the curse of the Specter Queen, or will the ancient order bring about the end of the world?

Indiana Jones gets a refresh with this female-driven mystery adventure, set in the 1920s, full of ciphers, ancient relics, and heart-stopping action – the first in a brand-new series!

Yesterday Crumb and the Storm in a Teacup by Andy Sagar (GR/SG) – It’s a short book but it’s absolutely so, so cute?! I very much recommend this book if you want something sweet and  just adorable. Reading this felt like a warm hug and a good cup of tea (it is a teahouse, after all. Plus I see Mrs Dumpling as Helena Bonham Carter so 😁😁 ➡ Yesterday Crumb is no ordinary girl. She was born with fox ears that have cursed her to a lonely life working in the circus and her origins are a complete mystery. But she is about to escape into the adventure of a lifetime when she learns that she’s a strangeling who’s lost her magic.

Taken in by Miss Dumpling the flamboyant tea witch, Yesterday is introduced to a magical, walking teashop filled with fantastical customers, a flying teapot turtle called Pascal and powerful spells in every teacup!

Yesterday starts to rediscover her magic and to feel a sense of belonging. But a mysterious figure of darkness is working hard to ensure her new life comes crashing down – and it all starts with a deadly shard of ice in Yesterday’s heart…

But there’s nothing that can’t be solved with a pot of tea, a slice of cake and a BIG dash of magic!

The first in a new fantasy series for readers aged 8-12, about a girl with fox ears who has never fitted in. With adventure and magic in every teacup, this is perfect for fans of The Strangeworlds Travel Agency and Starfell.

A Psalm for the Wild-Built by Becky Chambers (GR/SG) – This is a novella so it’s a short read but it’s just so good? It hit me where it hurt, made me think ‘yeah that’s me’, while also going ‘stop hitting me where it hurts!’ A good choice for a rainy day! ➡ Centuries before, robots of Panga gained self-awareness, laid down their tools, wandered, en masse into the wilderness, never to be seen again. They faded into myth and urban legend.

Now the life of the tea monk who tells this story is upended by the arrival of a robot, there to honor the old promise of checking in. The robot cannot go back until the question of “what do people need?” is answered. But the answer to that question depends on who you ask, and how. They will need to ask it a lot. Chambers’ series asks: in a world where people have what they want, does having more matter?

All right! It has actually been rainy off and on so this post is quite appropriate! Have you read any of these? Do you agree with my choices? Do you want to give me any recommendations for books you think are good to read on a rainy day?